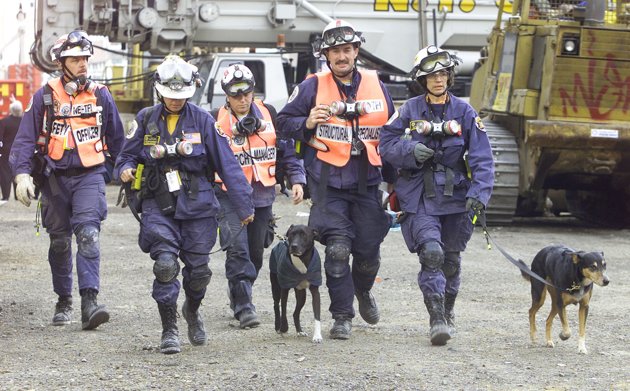 A countless amount of heroes emerged from the chaotic aftermath of the 9/11 atrocities. True to form, man’s best friend was also there, searching among the rubble as a stunned America struggled to make sense of it all.

Four Federal Emergency Management Agency (FEMA) dogs based out of Beverly were among the first to arrive at the World Trade Center on that fateful morning.

Moxie (pictured below) was only 3 years old at the time. This was her first real-life emergency, as she was only recently certified as an Urban Search and Rescue dog. 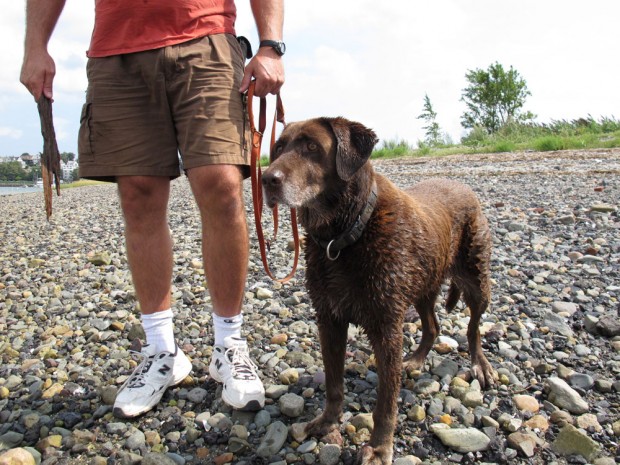 Maxie’s owner, Mark Aliberti a Winthrop firefighter recalls arriving at the scene, “The World Trade Center — for lack of a better term — it was a complete mess,” he said. “The terrain we were working on was pretty unusual. A lot of steel, a lot of just — everything was there.”

Aliberti and Maxie spent a gruelling 8 days at Ground Zero searching for survivors, mostly in one of the World Trade Center buildings that was still standing.

Working together, Aliberti would help navigate Moxie through the twisted steel and concrete, while her nose was left to do the work. Section by section, they searched through the rubble looking for survivors. 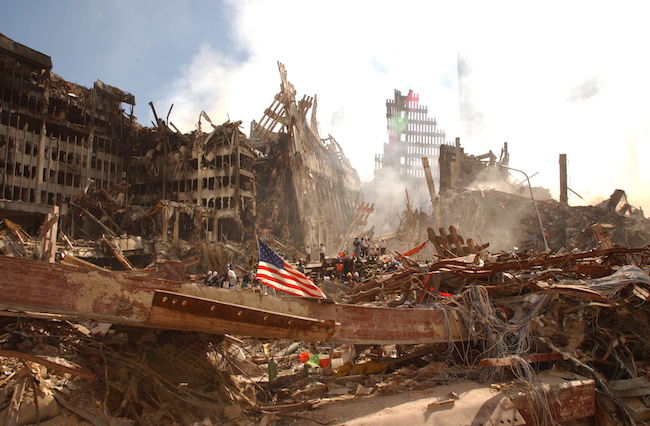 Searching through the debris was treacherous work

The team found many cadavers. “I started marking these spots after a couple of days.” Aliberti said, “And I’d mark them, and we’d leave, because we were still hoping to find live victims. And what happened is that eventually I think it became apparent to everybody that three or four days into it that we probably weren’t going to find anymore live victims.”

It transpires that finding those live victims is very important to dogs such as Maxie – this is what they are trained to do. If they are unable to find any, they begin to feel as if they are failing.

To keep her spirits up and to keep her focused, Aliberti would find other ways to reward her.

He would often ask other firefighters to hide among the rubble, so Moxie could find somebody alive.

“That’ll bolster them, get them up and running again,” Aliberti explained. “You have to do that after a while because it’s long days.” 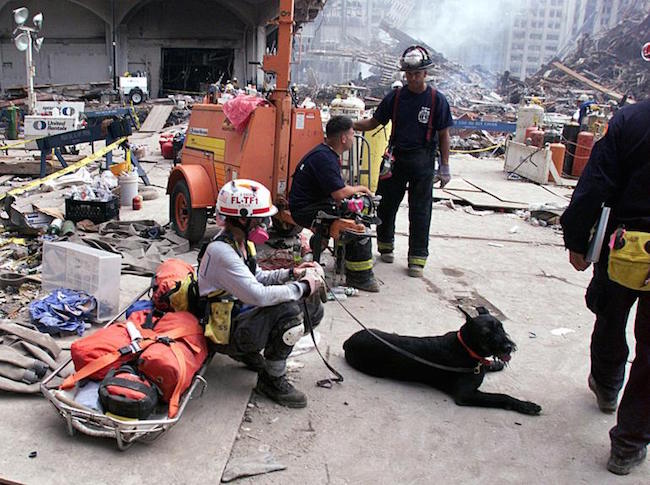 Keeping spirits up was important – Firefighters would sometimes hide in the rubble so that the dogs could find living survivors.

And those long days provided many hazards. “With so much debris it was difficult to know what you were really standing on.”

At one point, while taking a break and playing a game of tug-of-war, Maxie stood on some broken glass that was hidden beneath thick layers of dust.

“I realized it was blood,” Aliberti said remembering seeing her hind paw torn up. “She cut a pretty good flap out of it.”

The team veterinarian said Moxie would not be able to continue working while her paw healed.

Dismayed, Aliberti headed back to the Javitz Center, which served as a staging area for the FEMA teams. 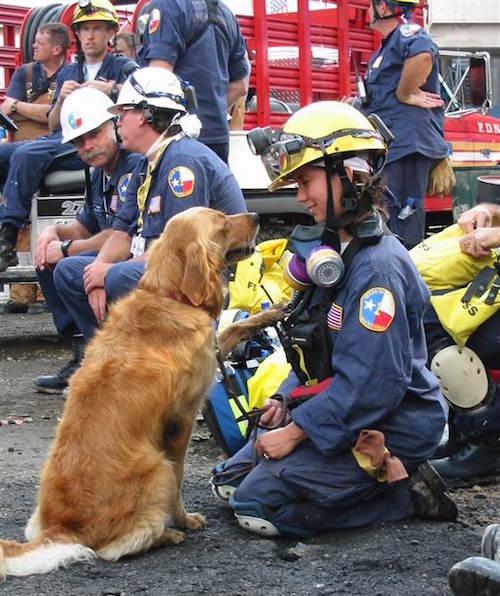 A firefighter takes a much needed break with her search dog

However, there he spoke to veterinarian Lori Gordon, who suggested gluing the flap of Moxie’s paw back together.

Aliberti reflects upon this as the military mentality at the time. You have a job to do, “you treat the people you can put back in the fight as soon as possible.”

It turned out that the patch up worked, “We’d treat it, superglue it, and wrap it for the night… She’d usually be able to get through the day as long as it didn’t get too wet,” Aliberti explained.

Like many search and rescue dogs, Maxi stayed with Aliberti for her entire career. Even in retirement, she and Aliberti spent a lot of time together.

They would often go to Coughlin Park in Winthrop to enjoy a sunny day outside.

In the midst of true horror, they were unsung heroes that quietly did what they could.