Kankuntu – The Hero Hunting Dog That Battled Against 5 Armed Pirates 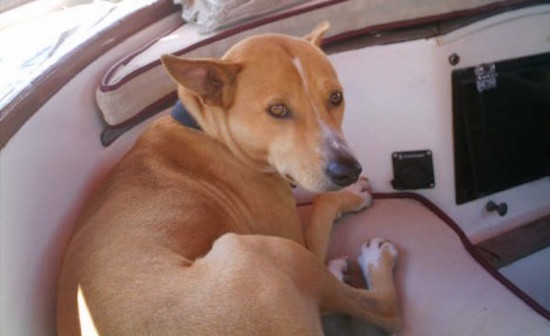 We have published many accounts of dogs acting bravely, but this story does raise the bar. In 2008 a 2 year-old hunting dog named Kankuntu really did put his life on the line, taking on 5 armed pirates in an attempt to save the lives of his owners.

The incident took place off the coast of Venezuela. The dog’s owner’s, British businessman Peter Lee and wife Betty were sailing through the Caribbean on a round-the-world adventure.

Kankuntu was stabbed and took a bullet to save his owners

Mr Lee said they were sailing through choppy waters about two miles off the coast of Venezuela when he saw a battered, unmarked fishing boat speeding towards them.

As the boat approached, Lee realised they were in danger and tried to ram his pursuers in a bid to knock them off their boat as it came alongside them.

One of the five men aboard fired a shot at him but he still decided to ram them a second time in an attempt to get away.

Recalling the terrifying ordeal, Mr Lee said: ‘I wasn’t going to give up just like that. I steered my boat into them broadside on and knocked their leader off his feet as he was about to jump on board.”

“He fell back into the boat but then he got up and took a proper stance and took his pistol out and held it with both hands and shot at me.”

After the second shot whistled past his head he realised he would not be able to outrun their speedy vessel. 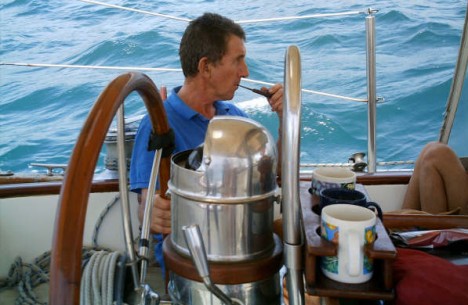 As they braced themselves for the worst, five men, mostly in their late 20s, boarded the yacht. Their leader, a man in his 50s, ordered Mr Lee to be tied up.

All of this proved too much for the couple’s two-year-old hunting dog. Kankuntu launched himself at the pirates, furiously attacking the men, biting and snapping where ever he could.

One of the men stabbed the dog between the shoulder blades with a gut hook knife, but still he continued fighting until a pistol was fired, the bullet piercing one of his legs.

“The dog had a real good go but they shot him and they stabbed him between the shoulder blades,’ said Mr Lee. ‘He’s a very brave dog. He only weighs about 50lb but he thinks he’s a lion.”

Badly injured, Kankuntu managed to drag himself under a table and the pirates turned their attention back to the couple, demanding money.

With local currency worth less than £150 on board the pirates tried to tug off Mrs Lee’s wedding ring.

Because the ring had never left her finger in 35 years of marriage, it would not budge. As blood poured from her torn finger, the men abandoned the attempt and looked for anything else of value.

“I was wondering how long it was going to go on,” he said. “I thought that as long as I lay down and didn’t do anything stupid then hopefully they would leave when they had what they wanted. It seemed it was only a few seconds later and they were gone.” 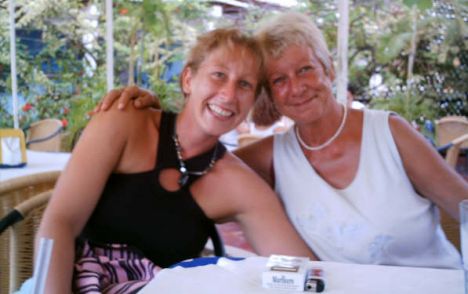 Mrs Lee, still in a state of shock, was convinced that the pirates had thrown her husband overboard.

Mr Lee then appeared: “I hobbled back to the cockpit and sat on the steps leading down below and said, ‘Come on, old girl, get yourself together now and get me untied’.

“This is what you have to do. I’m just an ordinary working man but I’m British as well.”

After the raiders left, the couple found they had left almost empty handed. They had managed to take their communication equipment, but they had been unable to remove the GPS navigation system. This allowed the Lees to set sail for Trinidad, their original destination.

Mr Lee said he had patched up the dog’s stab wound and removed the bullet, which had lodged near its back legs.

“It was not that hard. The bullet almost came out on its own,’ he said. ‘The vet has now been around and the dog is almost back on its feet.”