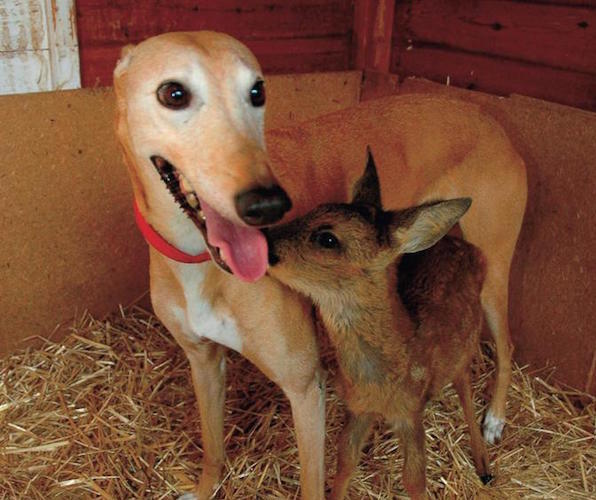 Jasmine had been abandoned before she arrived at the Nuneaton and Warwickshire Wildlife Sanctuary, UK back in 2003.

The stray Greyhound had been found dumped in a garden shed and was cold, filthy and malnourished. Shivering and desperate for food, she needed several weeks under the special care of the staff to nurse her back to full health.

And it seems as if the kindness and patience shown to her back then, left a long lasting impression.

During 8 years of living at the sanctuary, Jasmine cared for over 50 animals. She would take on the role of a surrogate mother, nursing them with affection as soon as they arrived. 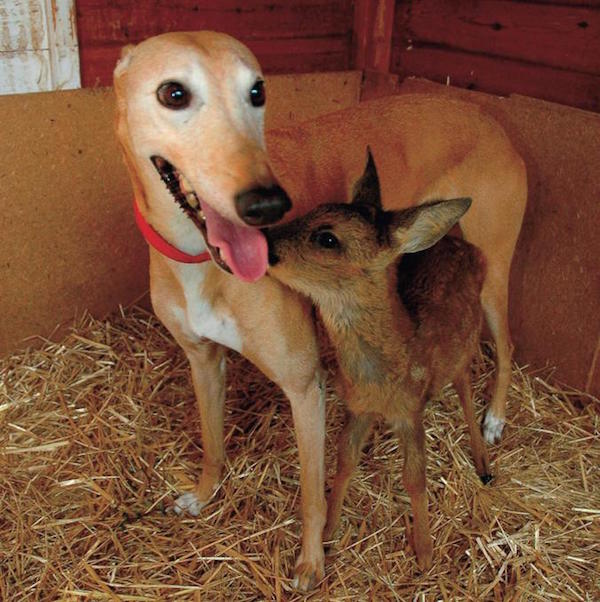 Jasmine held no prejudice against the animals she would care for. The list of stray waifs nursed by her included several puppies, foxes, a fawn, 4 badger cubs, 15 chicks, 8 guinea pigs, 15 rabbits, a deer and a goose.

Interviewed in 2008, sanctuary manager Geoff Grewcock said: “She simply dotes on the animals as if they were her own, it’s incredible to see.

“She takes all the stress out of them and it helps them to not only feel close to her but to settle into their new surroundings.

“As soon as an animal is brought in, she walks over takes a sniff or two and then licks and cuddles them.”

Even birds would perch themselves on her nose and be led around the shelter. 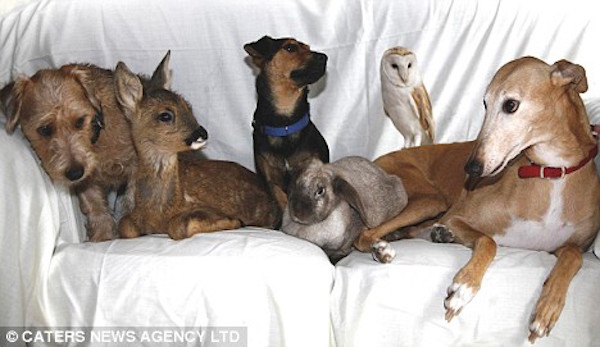 When an 11-week-old roe deer fawn (later named Bramble) was found semi-conscious in a nearby field, Jasmine did what she had done for so many animals before.

To help nurse the fawn back to full health she cuddled up to her to keep her warm, showered her with affection and made sure nothing was matted in her fur.

“It is quite amazing, particularly as she is a greyhound breed and they are usually quite aggressive, that is why they are used for racing.”

Being abandoned in a garden shed and obviously neglected herself, it is a wonder that she feels such warmth and affection to other creatures.

“It’s not just animals,” Geoff explained, “she is great with children too, she is such a gentle, big-hearted dog.” 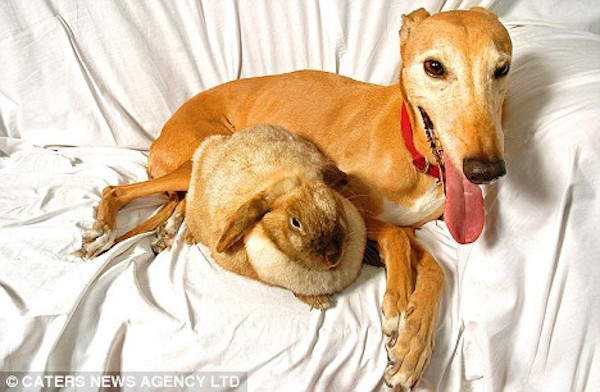 Jasmine cared for Bramble until the fawn was old enough to be released back into the wild.

Speaking at the time, Geoff said: “they are inseparable at the moment, Bramble walks between her legs and they keep kissing each other.

“They walk together round the sanctuary. It’s absolutely marvellous. It’s a real treat to see them.

“But she is like that with all of our animals, even the rabbits which greyhounds usually chase down the track.”

Geoff goes on to reflect on another time Jasmine showed her capacity for affection.

“I remember we had two puppies that had been abandoned by a nearby railway line, one was a Lakeland Terrier cross and another was a Jack Russell Doberman cross.

“They were tiny when they arrived at the centre and Jasmine approached them and grabbed one by the scruff of the neck in her mouth and put him on the settee.

“Then she fetched the other one and sat down with them, cuddling them.

“She has done the same with the fox and badger cubs, she licks the rabbits and guinea pigs and even lets the birds perch on the bridge of her nose.

“It’s very touching. Her maternal instincts take over all the time.”

Jasmine led a long life giving more love than can ever be measured during her time at the sanctuary. Sadly, she passed away back in 2011.

However, her story touched many people with healthy donations subsequently being made to Nuneaton & Warwickshire Animal Sanctuary animal shelter.

It is still possible to do so now by visiting here.