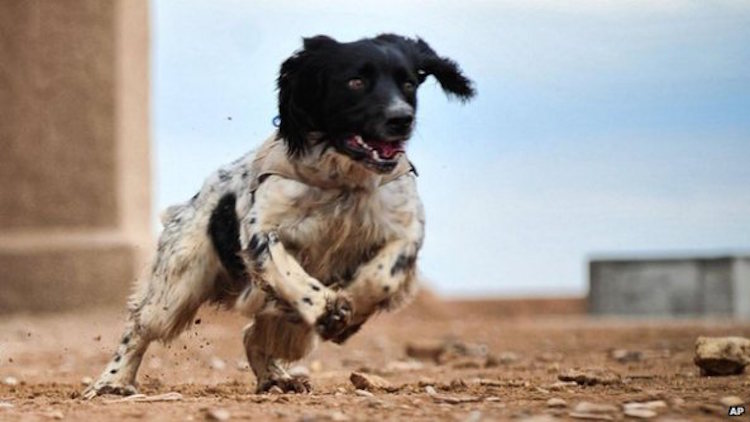 There are two parts to this amazing story. One highlights the important role bomb detection dogs have in saving human lives in the front line of modern warfare.

The other demonstrates the incredible bond that can occur between a dog and his handler.

In 2012, Theo, a springer spaniel cross, received the PDSA Dickin Medal for life-saving bravery in Afghanistan.

Together with his handler, Lance Corporal Liam Tasker (26), the dog set a new record for bombs discovered in one deployment.

In just five months in Helmand Province, the pair uncovered 14 bombs and many weapons – at that time, more than any other dog and handler in the conflict.

Not only did Theo sniff out homemade bombs, on one occasion he identified two hidden bags of fertiliser and other parts for making improvised explosive devices.

On another occasion he uncovered a tunnel leading to a room where insurgents were making bombs and hiding from coalition forces.

The Dickin Medal is the highest accolade that an animal can receive for saving human life while serving in a warzone. 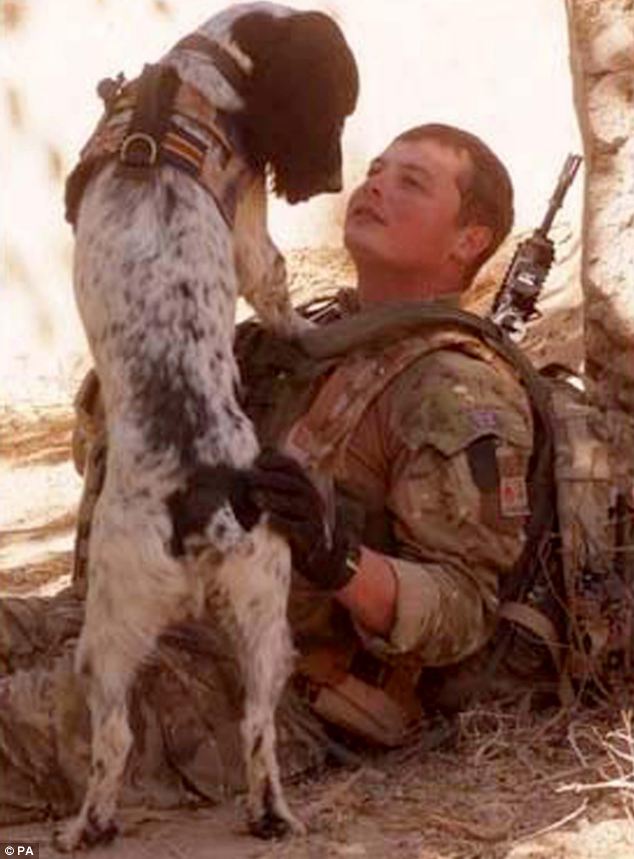 ‘This award recognises not only a very special dog, but also the contribution that all our dog teams make in detecting improvised explosive devices and weapons caches.’

The ceremony took place at the Wellington Barracks, in central London, in 2012.

Tragically neither Theo nor Lance Corporal Liam Tasker were able to attend.

On the 1st of March 2011, while on patrol, Tasker and Theo came under fire from Taliban insurgents. A sniper subsequently killed L/Cpl Tasker. Theo was rescued and taken back to the base by fellow soldiers.

However, within hours the dog suffered a seizure and also died. His death is thought to have been caused by the stress of Tasker’s death.

The bond between animal and human demonstrated in the most heart-breaking of circumstances.

L/Cpl Tasker’s family attended the London ceremony on his behalf, while the award was accepted by Sergeant Matthew Jones, who served alongside Tasker.

His mother Jane Duffy, 53, said “We are absolutely delighted and so very, very proud. It means so much because Liam put Theo forward for the medal when he was in Afghanistan because he was so good.

“He said that Theo used to get excited when they got out the Vallon [bomb-detecting equipment] and switched it on because it meant he was going out.

“Liam got his Mention in Dispatches [the oldest recognition of gallantry in the Armed Forces], so it’s lovely that Theo is getting his Dickin Medal and being recognised for his bravery as well.

”They’ll be watching us and they’ll be so proud. I just wish they were here to get it themselves. Theo and Liam saved so many lives out there.”

Mrs Duffy added: “I strongly believe that Theo died of a broken heart. I take comfort in that.”

Colonel Neil Smith, director of the Army Veterinary Service, said: “This impressive team undoubtedly prevented many soldiers and civilians being killed or injured.”