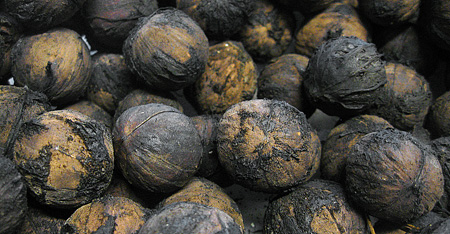 Can dogs eat walnuts? There are actually two answers to this question, as it does depend on the way in which your dog eats the walnut.

Scenario one is a common situation where you might find your dog eating walnuts. Imagine you’re at home and eating some nice oat type biscuits, your beloved dog comes sniffing over and you end up giving him one of the biscuits as a treat.

You then consider the fact that the biscuits contain walnuts and begin to panic – can dogs eat them?

A similar scenario would be if you drop a little biscuit on the floor by mistake. Your dog comes running out of nowhere and has licked it up before you can say ‘can dogs eat this’.

The truth is, a little store bought biscuits that happen to contain walnuts will not harm your dog. As Dr. Ashley Hughes, DVM, at Friendship Hospital for Animals in Washington said in a recent interview, ‘Walnuts are fine’ but only if it is just one from a packet of nuts or if contained within a biscuit.

Dangers may occur if said biscuits contain chocolate (dark chocolate being highly toxic to dogs) or other harmful flavorings. So it is best to check the ingredients too.

Walnuts on the ground – keep your dog away from them.

Can Dogs Eat Walnuts in the wild?

So walnuts are okay if your dog only has one and it happens to be store bought or as part of a biscuit. What about a walnut fallen from a tree in your yard or in the wild.

Well the fact is, walnuts in this scenario can be very harmful to your dog. The problem lies in the fact there could be mold or fungus growing on the shell. When nuts get wet the fungus can grow quite considerably.

The mold contains a substance called penitrem A. This is a tremorgenic mycotoxins that will cause some serious issues if ingested by a dog. The toxins can lead to seizures and other neurological symptoms, as well as kidney failure. In some rare cases it has proven to be fatal.

Symptoms of Walnut Toxicity in dogs

If your dog consumes the toxins from the walnut mold, symptoms to look out for include:

Vomiting, trembling & seizures, excessive drooling, lack of coordination, lethargy and loss of appetite. As the toxins affect the kidneys you should also look out for jaundiced symptoms such as yellowing of the eyes and gums and infected bowel movements, i.e urine and stool stained with blood.

It can take several days for these symptoms to occur, however if you detect any of the above, or suspect that your dog has eaten wild walnuts, take them to the vet as soon as possible. The faster you react to the signs, the better overall chance they will have of making a complete recovery.

Black Walnuts – can also contain the mold that is harmful to dogs.

Black Walnuts, are native to Northeastern U.S. and Canada, and cause similar issues to dogs if they are ingested while containing mold. The walnut hulls grow the mold when wet and will cause many of the symptoms listed above, if eaten in sufficient quantities.

The actual walnut also contains a toxin called Juglon, and although proven to be harmful to horses, it does not seem to affect dogs.

However, general gastric issues can occur if a dog eats too much black walnut and there is potential for the nut to cause throat or an intestinal blockage, especially in smaller dogs. 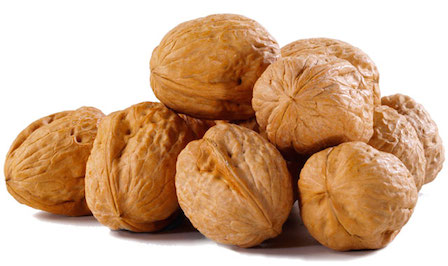 Similar to black walnuts, English walnuts can cause gastric intestinal issues if ingested by dogs. Likewise the size and shape of a walnut can cause an intestinal or throat blockage if it becomes lodged after consumption.

A moldy English walnuts will also contain the same toxins we have explained above. The tremorgenic mycotoxins found within the fungi will cause havoc with your poor dog. 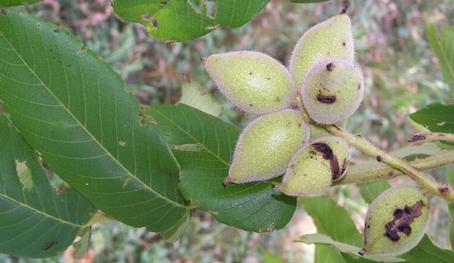 Japanese walnuts are not toxic apart from the mold that may grow on them when found in the wild. Again the symptoms are the same as listed above.

Of course, being similar in size and shape to the other walnuts we have discussed, the issue of it becoming an intestinal blockage is also a problem.

In short, do not panic if your dog has consumed a little walnut from a bag of nuts that you’ve opened, or if he nibbles on some biscuits you have in the house, (other ingredients being safe of course).

The time to panic is when you’ve taken your dog for a walk and he runs off coming across a walnut tree. If he has eaten any walnuts from the ground, the next stop is the vet. There your dog will be induced to vomit, or go through other procedures to eject the nasty toxins.

If caught in time, your dog should be okay. It will still be a very nasty experience to go through however, so prevention is the key.

The bottom line? If you can help it, do not allow your dog to eat walnuts.