The good news is, dogs can eat blueberries no problem at all. Whether your dog will eat this fruit however is debatable. While some canines love the taste of blueberries as an addition to their dog food, for others the fruit just doesn’t hit the mark. It maybe just a tad too bitter for them. However, if your dog digs the taste, feed away..

Can Dogs Eat Blueberries – Any Benefits

For us humans, blueberries are known as a fantastic antioxidant. Like most fruits they are healthy for us, and form part of a balanced diet.

The benefits of eating blueberries for our dogs are a little less significant. While the fruit is completely harmless to them, there have been very few studies to ascertain any potential positive effects. It is unknown if blueberries are a particularly healthy type of dog food.

However, one study, conducted in 2006 by the University of Alaska Fairbanks and published by the National Institutes of Health, did show that the antioxidant qualities that us humans benefit from, was detected in a pack of sled dogs.

The dogs were given blueberries as a dietary supplement and results showed an increase in antioxidant properties in their blood.

Such antioxidants are able to prevent damage to pre-radicals and do play a role in fighting conditions such as cancer and heart disease, both in humans and our pets. However, it is uncertain just how much would need to be consumed for their to be any effect in the prevention of such conditions. 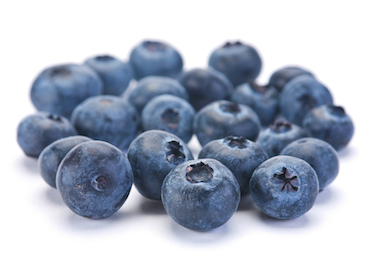 Can Dogs Eat Blueberries – Any Precautions

Not really. The main precaution is to not over feed your dog blueberries, especially the first time they eat them. While no adverse reactions have been reported widely, your dog may react strangely to any new food, and over feeding of any type of dog food is not advised.

Also, ensure not to ever feed your dog frozen blueberries. They may well get an upset tummy as a result.

And finally there is that little issue of your dogs taste preference… they may just not like it. And if they do like eating blueberries, you have discovered another type of healthy dog food to add to their diet.