Can dogs eat beef jerky? Up until recently one would say that they could. Beef jerky is a treat that is actually widely manufactured for dogs. For many years you have been able to visit your local pet store and purchase some beef jerky as an enjoyable dog food snack.

However, a food scare throughout 2013 showed that beef jerky may have caused over 500 pet deaths since 2007. An alarming statistic I think you’ll agree. And one we explore below.

Back in January 2013, the U.S Food & Drug Administration FDA reported more than 3,200 dogs and cats had been sick and over 500 died, from eating chicken, duck, sweet potato and fruit-flavored jerky treats. Food products mostly imported from China.

The FDA has yet to determine why so many of our pets have become ill.

“This is one of the most elusive and mysterious outbreaks we’ve encountered,” FDA Center for Veterinary Medicine Director Bernadette Dunham has said in a recent statement.

The initial complaint with jerky treats began at the beginning of 2013 when a New York lab found trace amounts of six types of antibiotics in chicken jerky treats made in China, five of which were banned in the U.S.

These were obviously taken from the shelves, along with beef jerky products containing the same banned substances.

However, the agency has stated that the levels of the drugs detected by the lab were very low and therefore had not likely caused the deaths. The mystery surrounding the fatalities continues.

Because of this the FDA continues to test jerky products for chemical contaminants. An open dialogue remains between the FDA, Chinese regulators and U.S. pet food companies in order to get to the root of the issue.

So can dogs eat beef jerky? The answer at the moment is if you choose to feed your dog beef jerky, do so with caution.

The FDA recommends that owners who feed their dogs jerky treats should observe for signs of decreased appetite, vomiting and /or diarrhea, increased water consumption and increased urination of their pets. If your dog exhibits any of these signs after eating beef jerky take him to a veterinarian immediately.

If possible, keep the packaging of the jerky to help with the ongoing investigations.

The problem beef jerky foods originate from China. In the past 10 years there has been a dramatic rise in the import of processed pet food from China into the U.S.

From 2003, the year China first approached the USDA about regarding such exports, to 2011, just an 8 year period – pet food exports from China to the U.S grew 85-fold.

Pet treats, including jerky, have become the fastest growing section of the pet food industry, reflecting the habits we have made in feeding our dogs treats, (in this case to the detriment of their health).
The chart below shows what a huge leap that is: 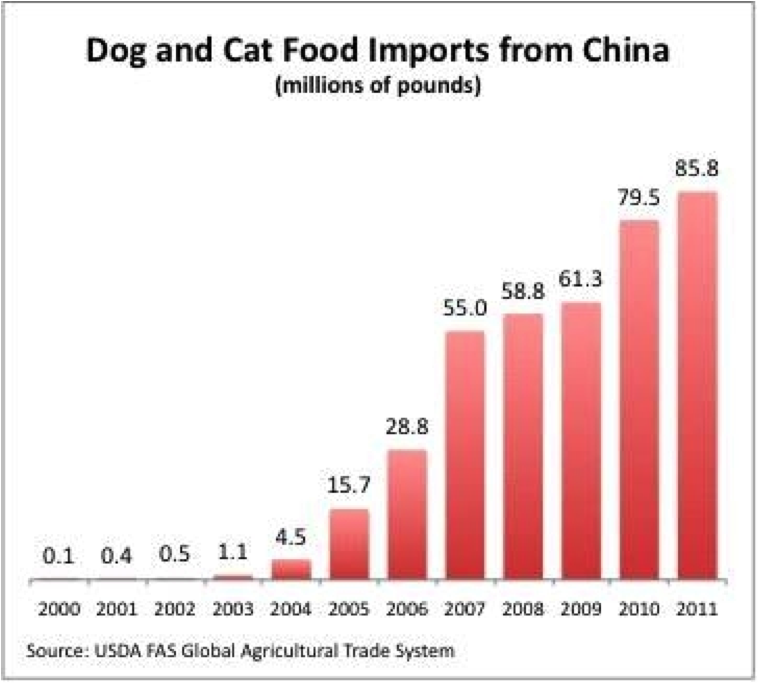 As stated in the segment above, it was a lab in New York that first reported the fact jerky products imported from China contained banned substances that could be at the route of the many dog deaths that have occurred in recent years.

After further inspection on Chinese soil, authorities identified firms that had falsified documents regarding their use of glycerin.

Glycerin is an ingredient found in most jerky pet treats and also implicated as a possible cause of the problem.

Irradiation may be another cause that the FDA will be investigating. The Agency has announced it will begin testing affected products to determine whether irradiation may have contributed to the issue.

Companies such as Nestle Purina PetCare have confirmed they use irradiation to sterilize treats that they manufacture.

This ties in with a report carried out by the Australian government back in 2009. There they have banned the use of irradiation techniques for the sterilzation of pet food, following reports of paralysis and death in cats after consuming irradiated food.

It is clear that beef jerky treats are not an essential part of a dog’s diet. You do not need to feed your dog these foods, and manufacturers should not be producing anything that may harm our pets.

In a fight to remove these products from the shelves, a petition has been started over at DogFoodAdvisor. If you feel that these chinese made jerky products should be recalled from American stores, head here to sign their petition now.

Can dogs eat beef jerky? If you have any comments on your own experiences with feeding your dog beef jerky, or you have any views on the import of poisonous pet foods from China, please leave them below.